6 Things Christians Should Know About Hanukkah

Whether you’re new or old to the Jewish Festival of Hanukkah, there are a few things you should know.

There’s only one spelling in Hebrew (חנוכה) but how do you write that in English? The first letter is a “ch” sound, like the Loch Ness Monster – how do you write that in English? Ch? Kh? H? Should there be one or two N’s? One or two K’s? Ah at the end or just A? So we have Hanukkah, Chanukah, Hanukah, and a plethora of other options. It doesn’t really matter though – we’ve chosen to go with Hanukkah but you can write it however you like.

A couple of hundred years before Jesus, back when the Greeks had colonized the country (before the Romans came along) the evil ruler Antiochus IV pushed it too far in oppressing the Jewish people of Judea. Jewish practice and Bible reading had been banned, and at one point, elders were being forced to eat pig’s flesh, sacrificed on the altar of God’s temple in Jerusalem. The people decided enough was enough, and long story short, kicked the Greeks out of the temple, the city, and the land. The Hanukkah dreidel (spinning top) is to remember the terrible times when they’d have to pretend they were just playing games instead of studying the Bible, and it has the first Hebrew letters of the sentence “A great miracle happened there” (or “here”, if in Israel) written on the sides.
They re-dedicated their temple to God and enjoyed a time of autonomous rule (until the Romans came along). It’s a great story that gladdens the heart of Jewish people the world over. There’s also an associated legend of miraculous oil which may or may not be true, but we’ll get to that in a minute.

Unlike other Feasts of the Lord laid out in Leviticus and Numbers, Hanukkah is a latecomer to the Jewish calendar. However, like Purim (the feast established in the book of Esther), it is sanctioned in the Bible. It is mentioned in the Gospel of John, chapter 10. Verse 22 tells us that Jesus had gone to Jerusalem to celebrate the Feast of Dedication, which is Hanukkah (Hanukkah means “dedication”). The name comes from the rededication of the temple after the scandalous and blasphemous desecration by Antiochus IV and friends. It is natural that such a dramatic national victory would be celebrated and commemorated by all who loved their nation. And that included Jesus. The purity of the temple was certainly a matter close to his heart.

4. It has profound significance

The oil story goes like this: when the temple was back in the hands of the Jewish people, they quickly set to work getting rid of the Greek idols that had been erected, cleaning it up and setting it back in order. The huge seven-branched temple menorah needed to be relit, since God had commanded that the light was to burn perpetually. The oil for the lamp was no ordinary oil, but had to go through a process of sanctification which took seven days. However, there was only enough oil there to last for one day… what to do? The tale handed down from generation to generation is that this small supply miraculously lasted for eight days – which gave enough time for more oil to be prepared.
This is why oily foods such as donuts and latkes are eaten in memory of that miracle. It also explains why the Hanukkah candlestick has nine branches rather than seven – to symbolize the eight-day miracle and the extra “servant light” from which the others are lit.
I expect you can see some meaning for us as believers in this story, whether it really happened or not. Jesus, light of the world, also calls us to be the light of the world – He is the “servant light” who sets us ablaze to join Him in shining light in the darkness. Moreover, there are several times when an eight-day festival of dedication is mentioned in the Bible, long before the Greeks showed up. You can read more about that here:

HANUKKAH IS A HOUSEWARMING PARTY >>

It’s almost like a motif, based on the eight-days of the Feast of Tabernacles and the idea of rededicating what is holy, and realigning with God.

5. It’s an opportunity to show love to Jewish people

The fact that many people feel strongly about saying “Happy Christmas” rather than the generic greeting of “Happy Holidays” shows that having our particular holiday noted and celebrated makes a difference.
Since Jesus celebrated Hanukkah, it is far from disloyal to Jesus to wish his brethren “Happy Hanukkah!” Whether verbally, in a card to Jewish friends, or even writing a card to your local synagogue, it’s a lovely way to bless Jewish friends, recognising this important event in Jewish history.
The temple that was reclaimed from the Greeks was the temple of the God of Abraham, Isaac and Jacob – the very temple in which Jesus himself worshiped – so it is quite fitting that all His followers can be in solidarity in rejoicing over the Hanukkah event!
If you love Jesus, you are grafted in to the commonwealth of Israel, and it was your Father’s house that was desecrated, faith in your God that was outlawed, mocked and vilified… and your family who were oppressed and downtrodden. The victory of Hanukkah and the powerful theme of rededication of God’s property for His holy purposes is relevant for both Jews and Christians.

6. It takes courage to display your light

It is traditional for Jewish households to display Hanukkah menorahs in the window, for all to see. There have been times in history when it has been a very brave thing to do. Some defied all odds, defiantly putting the hanukkiah up anyway, despite the danger.
Yad Vashem Holocaust museum has the actual Hanukkah menorah you can see in this picture, and tells the accompanying story: 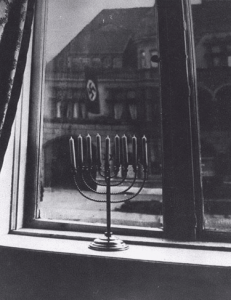 On Hanukkah 1932, just one month before Hitler came to power, Rachel Posner, wife of Rabbi Dr. Akiva Posner, took this photo of the family Hanukkah menorah from the window ledge of the family home looking out on to the building across the road decorated with Nazi flags. On the back of the photograph, Rachel Posner wrote in German (translated here):

But even in some parts of America it can take courage to make your Jewishness so evident. During Hanukkah 1993, the Schnitzer family were horrified to find that a cinder block had been hurled through their five-year old son’s window, in an anti-Semitic attack. Amazingly, the appalled residents of their town in Billings, Montana, all decided to put Jewish Hanukkiahs in their windows in solidarity.2 The attacks by the KKK soon stopped. It took courage for people to stand with their Jewish neighbors, knowing that they are making themselves a target too, but what a great example to us all.
Don’t hide your light this Hanukkah time, come what may. You don’t need to have a hanukkiah to take your stand against the darkness – just let your light SHINE!

Photo by Enrique Macias on Unsplash

ONE FOR ISRAEL is an initiative of native-born Israelis on the forefront of high-tech media evangelism, proclaiming salvation to Israel, raising up spiritual leaders through ONE FOR ISRAEL’s Bible College and equipping them with the tools they need to transform our communities.
All Posts
PrevPrevious ArticleAlarming Times for Jews Worldwide
Next ArticleSomething New Happening in the Armenian Quarter of JerusalemNext