Imagine Judaism for the past 1,800 years – any kind of spiritual message one wished to bring in, had to go through the “gate keepers”, who are of course the Orthodox Jewish Rabbis (“Pharisees”), whom Yeshua (Jesus) accused:

MATTHEW 23:13
“Woe to you, scribes and Pharisees, hypocrites, because you shut off the kingdom of heaven from people; for you do not enter in yourselves, nor do you allow those who are entering to go in.”

Ever since the days of Messiah, the Rabbis consider themselves the gospel’s greatest enemy, blocking the message of the gospel from Israel, not allowing Jewish people to hear about the free salvation offered to them in the death and resurrection of their Messiah.
However, today things have changed! We no longer have to bring spiritual messages via the rabbis, we can now go around them!

When you think of Israel, maybe you imagine a desert scene with camels grazing, people who live in tents and ride donkeys to work. But modern-day Israel is… well, VERY modern! We love technology, and we are one of the pioneering countries in the world when it comes to the high-tech industry!
Here are a few compelling statistics which emphasize the particular relevance of Internet outreach in Israel: 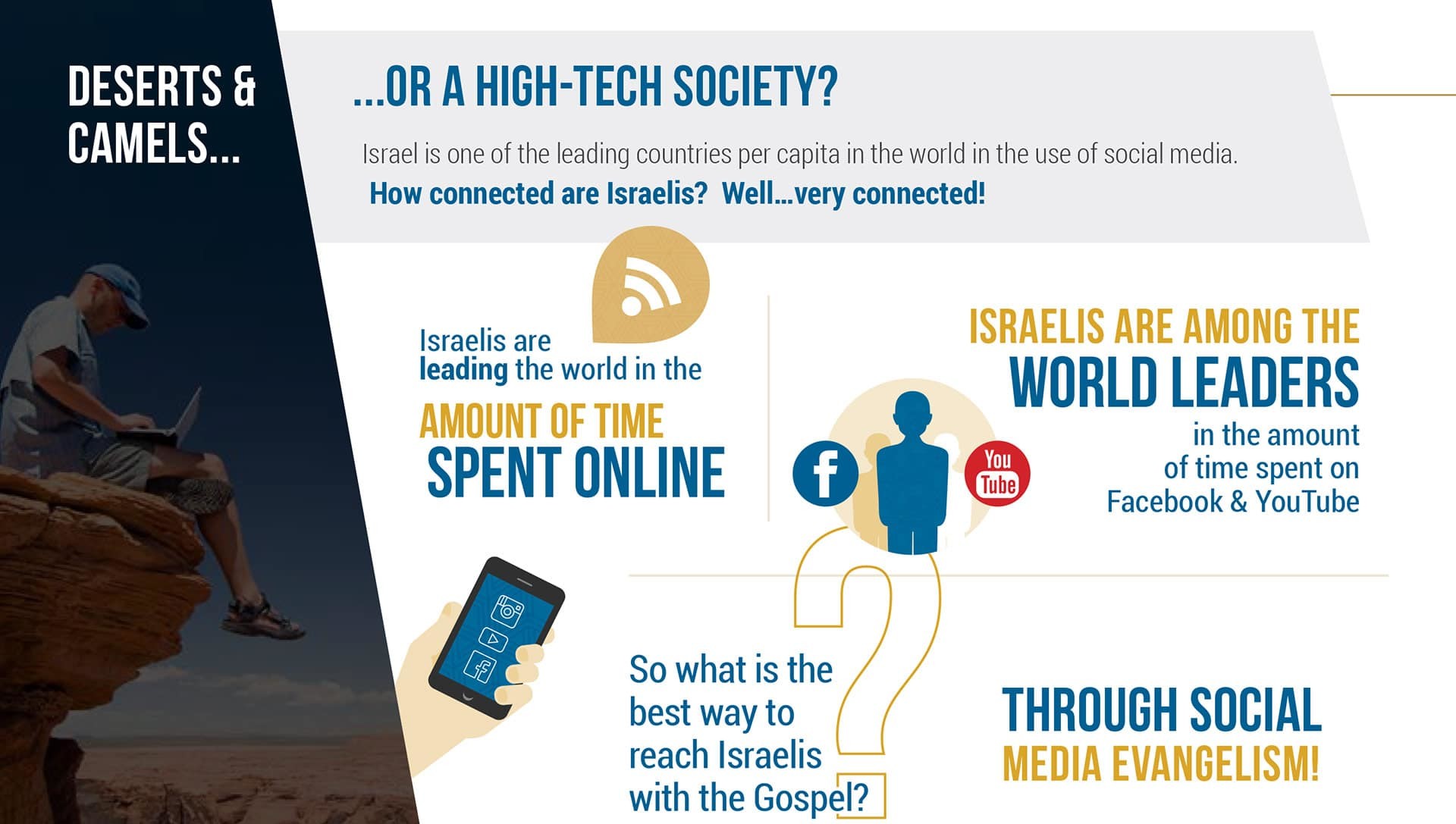 Allow us to elaborate:

In other words: while you eat and sleep, we Israelis are surfing the web online 😉 With that in mind…

Taking all of what we explained above into consideration, we believe that there is no greater way in Israel to share the Gospel of Yeshua the Messiah (Jesus Christ) than via the Internet. Why?

Here is how we at ONE FOR ISRAEL share the Gospel

We run about 10 different websites, focusing on different segments of Israeli and Jewish society. Here are a few of them:

www.imetmessiah.com – The I Met Messiah Project is a partnership between ONE FOR ISRAEL and Chosen People Ministries, which is based in New York. We came together to produce this on-going project in order to proclaim how Yeshua brings powerfully transformative change into the lives of all those many who accept Him as their Messiah – Jews, specifically.

So many Jews both in Israel and around the world have never heard of Jewish people who believe in Jesus. For thousands of years, rabbis have insisted that this is a paradoxical impossibility. See for example the words of Rabbi Aaron Moss from the Chabad movement, who answered the question, “Can a Jew believe in Yeshua?” in the following way: “A Jew can believe in Yeshua, in the same way that a vegetarian can enjoy a steak.” Also, in his response regarding the Messianic Jewish movement he wrote: “This is a movement of non-Jews, who pretend to be Jews by presenting themselves with Jewish names.” Without noticing, Rabbi Moss repeated one of the greatest lies of the Inquisition: the lie that a person must deny his Jewishness to be loyal to Yeshua. Through this video series, we challenge these claims head-on with the incredible testimonies of Jewish professionals who believe in Jesus.
Though it’s a little-known fact, there has always existed a remnant of Jewish people who believe in Yeshua. The Messiah was born a Jew and the first believers in Him were Jews. The first messianic community was Jewish, right here in Israel. Even during the holocaust, in the lines to the concentration camps there were many Jews who believed that Yeshua is the Messiah. You might not be aware of it, but throughout the world, there are large communities of Jewish believers in Yeshua (an estimated half million Jewish followers of Yeshua in the U.S. alone). In Israel, there are hundreds of communities and home fellowships of Messianic Jews. Through this series, we let them tell their own story – a story the rabbis have been trying to suppress for generations.
We hope you will find these testimonies to be encouraging! Alongside the I MET MESSIAH videos, and because Israel is the leading country in the amount of time spent watching videos on YouTube, we saw it fit to create interactive and engaging content for Israelis, in Hebrew to watch online by compiling a series of amazing testimonies by Jewish & Arab Israelis who have come to know their Messiah.

If you get to know Israelis at the mall (or Hebrew speakers anywhere), this is the website you want to share with them! 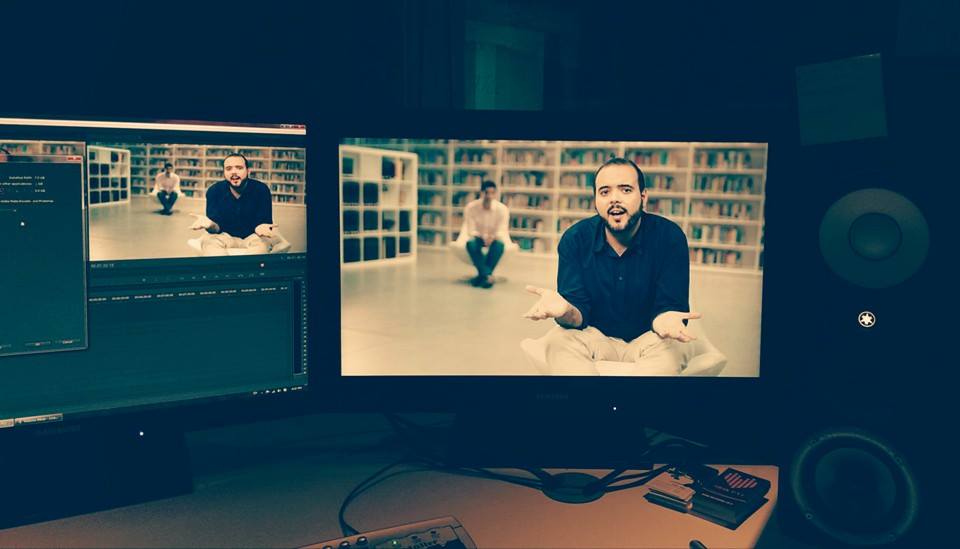 www.messiah.co.il  is our largest website for dealing with “Jewish apologetics”– answering the objections from the Orthodox Jewish Rabbis. This site is geared more for the religious and traditional Israeli. We’ve produced over 50 short videos answering approximately 100 objections, as well as over 300 articles answering further objections and sharing the gospel to a Jewish mind. At messiah.co.il we show how the rabbis have kept Jesus a secret for over 2,000 years. We even quote ancient Jewish sources to show that the Old Testament prophecies which we refer people to were interpreted in the past just as we interpret them, today – as being about the Messiah!
This is also the first time in history someone is stepping out publicly against the Jewish Orthodox Rabbis, forcing Israel to deal with “the elephant in the synagogue:” Yeshua (Jesus)!

Part of this project is available in English at:
www.oneforisrael.org/messiah

Largest website with more than 300 scientific and academic articles www.igod.co.il is our largest website for dealing with apologetic and is basically geared more for the secular Israeli. The website was built with an apologetic approach in mind, mainly geared towards people who have a critical approach toward the gospel, whether they come from secular, religious or atheistic backgrounds.
The website presents approximately 300 scientific and academic articles on various subjects with two main schools of thought in mind, “Greek” apologetics and Jewish apologetics. The former answers questions such as “Where was God in the Holocaust?” and “If Yeshua is the Messiah then why have so many Jews been murdered in His name?”. The latter aims at answering more philosophical and scientific questions such as “If God is real then why does He let children suffer?” or “How can creation be taken seriously when evolution has been proved correct?”. Dr. Michael Brown, Dr. William Lane Craig, Josh McDowell and Dr. Arnold Fruchtenbaum are just some of the writers whose articles appear on the website. All of these articles are arranged into six different categories to make them easier to access.
It is also possible to contact us via the website with questions, order various books including a copy of the New Testament – without charge, watch videos, enjoy our blog that is updated weekly and also converse with us via our Q&A Forum.

The New Testament in Hebrew

The NT in Hebrew – available free online as text, as an downloadable MP3, or as a smartphone app Radio Agape.fm is the one and only internet radio station based in Israel for believers in Yeshua (Jesus) and for those who seek Him! This is one other tool in ONE FOR ISRAEL’s toolbox to spread God’s love and truth. We launched it in 2013, and it’s now operating under the direction of Moti Vaknin. The station has Messianic music from mainly local but also international artists in Hebrew and English. With our program partners from around the world, we air in-depth teachings of the scriptures in Hebrew and English from a Hebraic perspective, along with encouraging segments from the scriptures. We are continuing to develop more programs and materials to bless our listeners in Israel and around the world.
The radio is available for listening via the Radio Agape website, the One For Israel Facebook page, via satellite radio (North America only), via the TuneIn app for iPhone and also our Android app.

Sharing the gospel IN ARabic

Arabic is a very strategic language to reach not only Arab Israelis, Palestinians but also millions of Israel’s Muslim neighbors with the good news of Jesus!
When we make evangelistic videos and materials to reach Arabic speakers in Israel, anyone can access it, anywhere in the world. To our surprise, we have seen a high response to the message of Jesus coming from Gaza! Our Arabic evangelism team follows up those who contact us with questions and objections, and several have come to faith. Their stories and testimonies are incredible.
See our translated evangelism materials, stories and videos here. THE BEST WAY TO BLESS ISRAEL IS WITH JESUS

So we have all these great and important videos, but how do we draw Israelis to the website and to watch them? We advertise with Google, YouTube and Facebook – meeting them where they are, so they can learn for themselves with confidentiality!
For each 2 cents (USD) you donate and designate for ‘Evangelism’, we can expose one more Israeli to a gospel video! For example, if you give $200 a month, 10k Israelis will be reached with the gospel of Messiah every month!

Please consider donating to this project so we can advertise the videos in Israel!

ONE FOR ISRAEL is an initiative of native-born Israelis on the forefront of high-tech media evangelism, proclaiming salvation to Israel, raising up spiritual leaders through ONE FOR ISRAEL’s Bible College and equipping them with the tools they need to transform our communities.
All Posts
PrevPrevious ArticleBIBLE COLLEGE
Next ArticleSoldiers MinistryNext