ONE FOR ISRAELBecause the best way to bless Israel is with Yeshua (Jesus)!
More
Give
IsraelNews

Even if Netanyahu’s Likud wins the majority vote, his grasp of remaining as Prime Minister is far from sure. Here’s some handy information to help you navigate the Israeli political scene.

Unlike in America where we vote in a president, Senate and Congress, in Israel you elect a party who sets forward their nominated president, and other party politicians. Compared to other countries, the number of parties represented in our election is relatively high considering the small population. This has resulted in a fragmented legislature where smaller and fringe parties outside the main political consensus have representation in the Knesset and no party has the 60+ seat majority needed to form a government on its own.

The party that wins the majority of seats is typically tasked with setting up a coalition government. But it’s not really that simple, your party winning the majority doesn’t guarantee the Prime Minister position, the President will nominate the party most capable of forming a coalition government. This scenario has happened before. In 2009, after a Tzipi Livni’s Kadima party won a tight race against Likud, Livni wasn’t able to form a large enough coalition to form her government. As a result, then-President Peres gave Netanyahu’s Likud, not Kadima, the role of forming the government and the prime minister position.

So coalition building is one of the most critical tasks, not just a single party win.  This is where things can get really difficult and compromises made.  You have the left, center and right leaning parties but then you also have religious Orthodox parties and Arab parties. 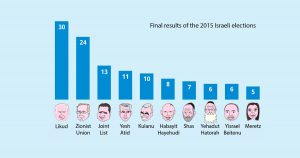 The typical play when you don’t have an overwhelming majority on the right or left is to bring centrist parties into your coalition. Religious parties like Shas are able to keep a strong dominance over the rest of the country because of their power to dissolve coalitions or keep them together.

Then, even if a majority of right wing parties come together, there’s always bargaining over who gets what portfolio, such as Finance Minister, or the highly coveted Defense Minister job.  And right wing coalitions have dissolved over these posts before.  So one of the right wing potential coalition members can force another election if they don’t get their demands met in a satisfactory manner. Also a huge factor besides all the potential coalition member infighting is the very real possibility to have one of Netanyahu’s coalition members or even some from his own party ask him to step aside because of the legal battles he’s facing.

In fact officially elections happen in Israel every four years.  But more often than not some form of governing coalition crisis leads to an early dissolution of the parliament and early elections.  And this current election is actually not from any coalition split but it was the Prime Minister himself that chose to dissolve the Knesset nearly a year early, and called a snap election back in April. Many see this move as a way to gather support to battle the legal charges he’s facing in court.  But one thing is for sure about elections in Israel, nothing is a sure bet!

But we do know this.  God has this country’s future in His hands.  We pray for our leaders from all the various parties and factions, and you can be praying with us.

No matter what party you might be supporting we can be united in these prayers:

Previous articleFamous psychologist shares his experience hiding Jews during the Holocaust!
Next article"You cannot serve God and curse the Jews!"