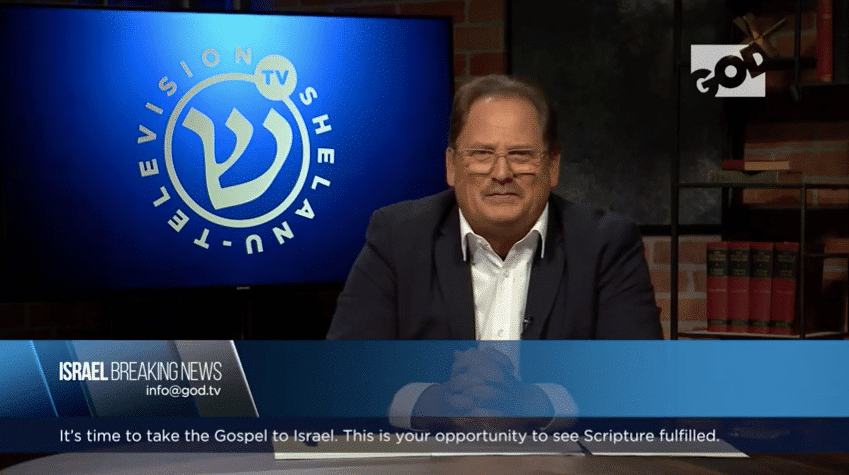 As those behind the new Shelanu Messianic TV channel can tell you, Israel can run roughshod over the rights of those who love Jesus sometimes. This is one of those times, and it’s time for believers to stand up for what’s right.

Dudi Amsalem, Israel’s Communications Minister angrily declared, “We will never let a missionary TV channel broadcast in Israel at any time or in any way”1, threatening to pull GOD TV’s new Messianic channel, Shelanu, off the air before it even broadcast its first program.

However, Messianic Jewish lawyer, Michael Decker, asserts that this move would be illegal. He seems confident that the Israeli courts will be compelled to uphold justice. Speaking with Kehila News2, Decker assured,

“The channel will not close. They might close it temporarily because of religious pressure, but then the courts will force them to reopen it… They have no case. Hot already airs several religious TV channels, including Christian ones. Channels like Daystar and METV have all aired on Israeli TV for many years. The only difference is that Shelanu is the first Messianic channel in Hebrew, managed by local believers. It annoys them, but it’s not a legal case against it. Amsalem has to say those things to appease his voters, but after those harsh words he also adds that he will close the channel ‘if they are indeed violating the law’ – and they are not.”

Israel’s Cable and Satellite Bureau was responsible for the decision to approve the seven year contract with GOD TV, and has the ultimate decision about whether to award the licence or pull it off the air. So far, they had been satisfied that the channel meets requirements and doesn’t breach any rules. It is illegal in Israel, for example, to proselytize to minors (under 18 years of age) but the Messianic channel has been upfront about their plans, and does not contravene any laws. “Our rules are that religious content is allowed, but we don’t allow content that has the potential of influencing the viewers unfairly, especially programs for young people,” said Asher Biton, head of the Bureau, in a statement reported by Kehila News.

Ward Simpson, CEO of GOD TV, said that God has supernaturally opened the door to take the Gospel of Jesus into the homes and lives and hearts of Israeli people. “We’ve signed a seven year contract – this is supernatural, it is historic, and this is prophetic.”

Explaining the name of their new channel, the website says: “Shelanu translates to ‘ours’ in Hebrew. We want every person in Israel to know, He is not a foreign Messiah, but a Jewish one! His name is Yeshua, and he has not forgotten his people”.

Amsalem fumed, “No channel can operate against its license – if this channel indeed is a missionary channel it will be removed immediately,” but a statement from the Cable and Satellite Bureau showed that they were confident everything was above board. “We have always allowed a pluralism in what we allow to be aired, and we allow religious content of all religions, as part of freedom of speech and freedom of religion.”

According to Aviram Eldar, the head of the internet branch of Shelanu, they are not breaking any laws. “It’s all about the positive, nothing negative. We have a right to present our faith in Yeshua as an Israeli, not a gentile. We even double checked this,” Eldar told Kehila News. “It surprised some people in our board that the licensing of the channel went so smoothly. One even asked the regulator. ‘Are you sure? You know we will convey material in Hebrew about Yeshua, right?’ No problem whatsoever.”

The anti-missionary organization Yad l’Achim does not see it that way. They praised Amsalem’s statement, saying that they had been collecting evidence against the channel for months.

But perhaps all they’ve managed to do is give the new Shelanu TV channel a huge amount of free publicity.

ONE FOR ISRAEL is an initiative of native-born Israelis on the forefront of high-tech media evangelism, proclaiming salvation to Israel, raising up spiritual leaders through ONE FOR ISRAEL’s Bible College and equipping them with the tools they need to transform our communities.
All Posts
Facebook Twitter Youtube Instagram Pinterest
Categories
Best Selling Book
Find Out!
Previous
Next
PrevPrevious ArticleIsraelis are responding to the Gospel!
Next ArticleThe Spirit of the Law – Kosher to GodNext