ONE FOR ISRAELBecause the best way to bless Israel is with Yeshua (Jesus)!
More
Give
Arabic EvangelismArabic Ministry NewsJewish EvangelismVideos & Articles

What Happens When an Arab Preaches Jesus in Israel?

Compelled by the Holy Spirit, he jumped up on the table, microphone in hand, and began to preach about Jesus. But what happened next amazed us all!

In Haifa, northern Israel, there’s a multicultural neighbourhood called Wadi NisNas. Each year they throw a “Holiday of Holidays” for all three faiths: Judaism, Christianity and Islam and believers make the most of the golden opportunity to share the good news of Jesus. And so it was that Carlos Damianos, an Israeli Arab, was presented with an unmissable chance to make Jesus known.

Filled with love for the Israeli crowd, Carlos spoke with earnestness about the Messiah in a way Jewish people could understand, pleading with them to accept Yeshua as their Lord and Savior.

Here’s what he said:

Moses. The most revered prophet in the Bible. Moses, when he went and killed the Egyptian, someone came and asked him, “Who are you? Are you going to kill me like you killed that Egyptian yesterday?” After that, Moses ran away for forty years. They rejected Moses, but he became the leader of the entire Jewish people.

Joseph. They sold Joseph, but he became the leader not just of the Egyptians but the savior of many nations. Brothers and sisters, this picture recurs throughout history also in our days.

Jesus. Yeshua who is called today “Yeshu” (a curse: “May His Name and Memory be Blotted Out Forever) is Jesus is the Messiah! He’s the Son of God that has been rejected by you. He’s been rejected for 2000 years. And today we, as a people – today the one thing that unites us is that we all oppose Jesus!

We sold Jesus. But Jesus is like Joseph. He is our Savior. He’s our blessing! And so like the ten brothers who went to Egypt to be saved from death they were horrified to see the person standing before them was the brother they sold years ago – Joseph. And the day will come.

Jesus the Messiah will be revealed before the whole house of Israel. Brothers and sisters, I implore you read the New Covenant – the New Testament. Jeremiah the prophet said that God would make a New Covenant different to the Old Covenant. The Sinai covenant judges us. It judges you! Because no one can measure up to its standards. The New Covenant was also given by God’s grace. A gift we didn’t deserve. The first covenant was given at Sinai and was written in blood, but in the blood of animals. The New Covenant also had to be written in blood – not the blood of animals, but the blood of the Messiah, the Son of God – because through His blood we can become children of God. And this is not just for Jewish people also for Gentiles!

Today I bring good news. Friends, brothers, we all live here and we face the same future, but the good news is that through this blood that was shed on the cross, we can receive God’s promise to our Fathers and receive status as his children and receive God’s Spirit as Ezekiel the prophet promised.

We are accepted by faith. Dear brothers and sisters, come, through Jesus we have eternal life peace with God. Not to be religious, but to have a living relationship with God. We’re not asking you to become religious – just to repent!

Check out the prophecies for yourself and return to the God of your fathers. Put your trust in His sacrifice for you who was slain on the cross 2000 years ago, and then you will receive forgiveness for your sins and also status as God’s child. Give him a chance – he’s been pursuing you for 2000 years! Don’t harden your heart or rebel against him as our fathers did.

Give him the chance – accept him.

Don’t turn your back on this good news!

Look at the prophecies so that you can enter into the blessing that the Patriarchs yearned for. They longed for this blessing: the forgiveness of sins and eternal life. So this Covenant is given to you and to your children through the Holy Spirit that was given after Yeshua gave Himself on the cross and rose on the third day.

Today we bring good news in his name.

Do not harden your hearts!

Don’t rebel against him!

It’s time to stop being stiff-necked the way the Bible has described us!

Let’s change our hearts, our attitude, back towards the God of our Fathers.

Several Israelis accepted Yeshua on the spot, right then and there, including a prominent member of a local synagogue.

Another Jewish man cried out, “I feel my heart burning with fire! What can we do to fix all the injustice we’ve done to Yeshua?” Here is Carlos explaining the answer to that question after his bold message. 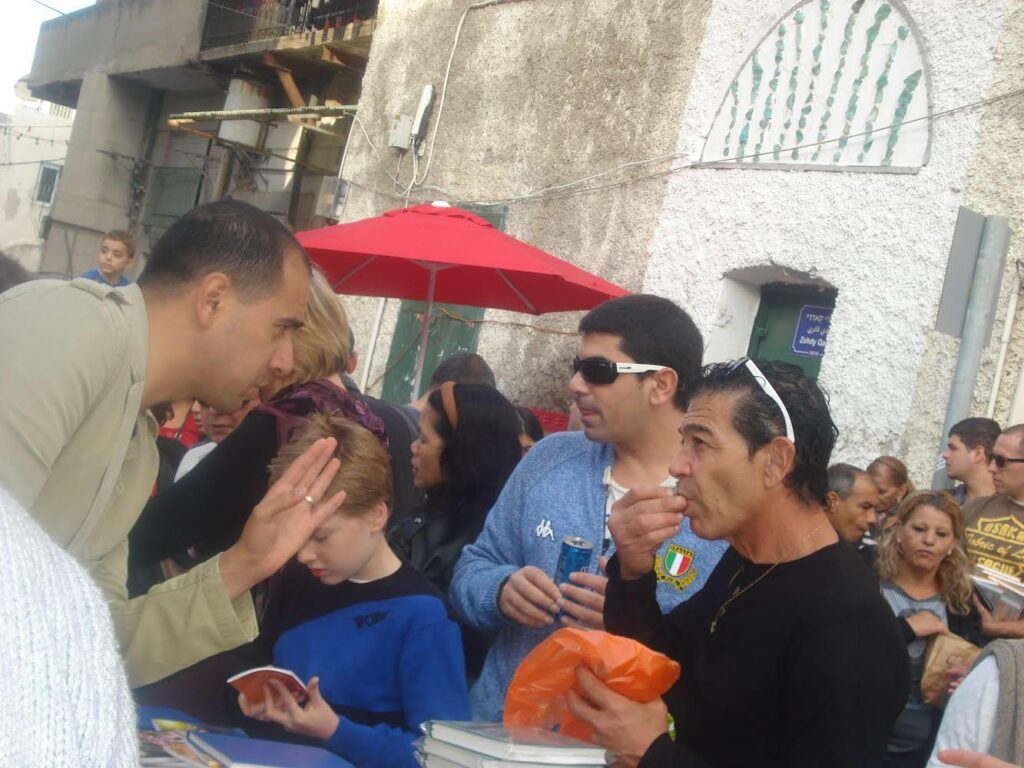 ONE FOR ISRAELhttp://www.oneforisrael.org
ONE FOR ISRAEL is an initiative of native-born Israelis on the forefront of high-tech media evangelism, proclaiming salvation to Israel, raising up spiritual leaders through ONE FOR ISRAEL’s Bible College and equipping them with the tools they need to transform our communities.
297,520FansLike
33,378FollowersFollow
5,924FollowersFollow
281,283SubscribersSubscribe

What's in a Mezuzah?

A Biblical Method to Overcome Evil

Previous articleRoyal Purple Fabric from Biblical Era Discovered in Israel
Next article“I am an ultra-orthodox Rabbi, but I also believe that Yeshua is the Messiah of the people of Israel!”