Magdala: A Game-changing Discovery Beside the Sea of Galilee

Many people come to Israel wanting to “walk where Jesus walked”, and of course, you can. You can visit Capernaum, Nazareth, Bethlehem and Jerusalem which all have sites mentioned in the accounts of Yeshua’s life, even if the exact earth he stood on is now buried under some 2000 years of accumulated soil and debris, far beneath the surface. For example, we have found the remains of a third century synagogue in Capernaum which is thought to have been built on the foundations of one that Yeshua would have taught in, but there is always a bit of debate and uncertainty about whether or not the sites are truly the real thing, and it’s usually quite difficult to prove one way or the other.

But there is one spot that has been unearthed recently that we can be sure that Jesus stood, that was recently found (as these things often are) by accident. It’s called Magdala.

The shores of the sea of Galilee, or as it is known in Israel, the Kinneret, is prime real estate and hotels host millions of tourists from all around the world year in and year out. So it is no big surprise that yet another plan was made to build yet another resort in the area of Migdal, where Mary Magdalene came from (Migdal means tower, and Magdalene means one from Migdal). The site has been identified with the ancient city of Migdal Nunia which means fish tower, and was once also known as Taricheae with a related meaning of the place of salted fish.[1]

They started to clear the area and dig deeply in order to lay foundations for the huge tourist center, when, to everyone’s amazement, they uncovered a first century synagogue that had been covered up since the year 67 CE, when Roman General Vespasian destroyed the town during the Great Jewish War.

And here is how we can be so sure that he must have been inside that very construction – we are told multiple times that he taught in all the synagogues in the area:

“Then he went around throughout the whole of Galilee, teaching in their synagogues and preaching the good news of the kingdom.” Matthew 4:23

“Now Yeshua was going around all the towns and villages, teaching in their synagogues and proclaiming the Good News of the kingdom, and healing every kind of disease and sickness.” Matthew 9:35

“Yeshua returned in the power of the Spirit to the Galilee, and news about Him went out through all the surrounding region. He taught in their synagogues, and everyone was praising Him.” Luke 4:14-15

When people come to visit Israel, I love to show them this synagogue: a place where first century Judaism meets Yeshua of Nazareth.

You can clearly see the construction, the remains of the painted walls, and even the mosaic on the floor. You can see the shape and dimensions of what is left of the synagogue, and imagine how it must have looked in the time of Yeshua. You can see the rows where the people would sit to listen, and the place where the rabbi taught. You can see the actual place where Yeshua would have taught the word of God. Right there, in that synagogue. It’s amazing.

The Magdala stone itself is a low table or stand on which to place the Torah within the synagogue structure, and has a very important design. It is the only remaining artistic impression of the second temple that was created while the temple was still standing, before 70 CE. The artist will have seen the temple with his own eyes, since Jewish people made the journey to Jerusalem three times a year for Passover, Shavuot (the Feast of Weeks) and Sukkot (the Feast of Tabernacles). That means that the Magdala Stone is an artist’s impression of the temple, created by an actual eyewitness.

The New York Times reported the incredible effect that the discovery had on Israeli experts: “”I approached the stone, and I could not believe what I was seeing,” said Rina Talgam, a Hebrew University of Jerusalem professor specializing in ancient art of the Middle East…  “They said I stood there for three hours.” Ms. Talgam concluded that she was looking at a three-dimensional depiction of the Temple of Herod, including its most sacred inner sanctum, known as the Holy of Holies.” [2]

This discovery was of huge significance for Jewish researchers, and very exciting for archaeologists for whom the second temple is of great import. It is also exciting for all of us who love the Bible, as it gives even more archaeological proof that the temple is no figment of the Jewish imagination (as many Muslims have asserted) but a verifiable historical reality. 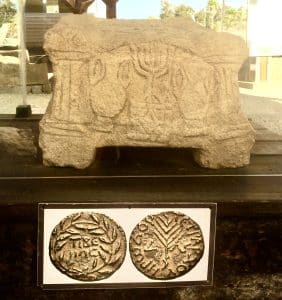 As if that wasn’t exciting enough, a coin was found in the synagogue that was minted in Tiberius in 29 CE [2]. Like the Magdala Stone itself, the image of the menorah features on the coin, affirming that it was a common symbol of Judaism in the first century . The temple menorah was stolen and carted off to Italy by the Romans, as depicted in the Arch of Titus, but clearly it was of great significance in Jewish thinking to feature so strongly in designs of the time.

This coin is also of inestimable value to those of us who love the Lord – it seems almost as if it was left there on purpose to be found, as concrete evidence that the synagogue was definitely up and running at the time of Yeshua’s ministry.

Coming to light at the perfect time

It is interesting that these discoveries were made in the last few years, at a time in which the historicity of the temple and of the accounts of Yeshua are being questioned. Just as the Dead Sea Scrolls were discovered shortly after the time when it was being suggested that the Jewish people had recently invented the Bible for political expediency, showing that they had done nothing of the sort, Magdala is God’s gift to the world today. It gives us more solid evidence that the Bible is not just a fairytale. Yeshua certainly did preach and embody the good news both in the temple in Jerusalem, and also in synagogues in the Galilee, and there are billions of us who are extremely glad that he did.

ONE FOR ISRAEL is an initiative of native-born Israelis on the forefront of high-tech media evangelism, proclaiming salvation to Israel, raising up spiritual leaders through ONE FOR ISRAEL’s Bible College and equipping them with the tools they need to transform our communities.
All Posts
PrevPrevious ArticleA Message to Christians Who Oppose Israel
Next ArticleKey Archaeological Highlights in Israel – 2016Next