Hanukkah is a Housewarming Party

Many people think of Hanukkah as a festival of light, which blurs with every other festival of light found in so many cultures and faiths, but the history of the festival and the stories that surround it are quite interesting. Leviticus 27 has laws on how a person can dedicate their house, and in Israel housewarming parties are called “Hanukkat Beit” parties – “dedication of the house” parties. The Hanukkah story is of a housewarming party for the ultimate house. Here’s an interesting twist on the story that goes all the way from the dedication of the second temple, through the reclamation of that temple from the Greeks, and right up to 1917…

The extra-canonical books of Maccabees don’t mention miraculous stories about one day’s worth of oil lasting eight days in the temple menorah, but instead describe the historical reclamation of the temple after it had been defiled by the Greeks during their conquest of Israel. In 165 BC, the Jewish people rose up against the occupying Greeks, and fought to take back their temple and for freedom to practice the Jewish faith.

It is said that the beginning letters of Maccabi stand for “Mi kamocha baalim Adonai (YHVH)” which means, “Who is like unto you among the gods?” (Ex 15:11). It is seen as a time of cleansing from idolatry and rededication.

The Talmud, on the other hand, mentions nothing of the political or heroic conquest of the Maccabees, but instead tells the story of how the pure and holy oil necessary to light the temple menorah miraculously lasted for seven days longer than expected.

The story pops up in Tractate Shabbat 21b, almost as a side note. During instructions on candle lighting for Shabbat, the section explains about lighting candles for Hanukkah, and in the middle of that discussion, as if suddenly realising that people may not know about the holiday, the question is asked, “What is Hanukkah?” The Talmud then goes on to discuss whether one should light one candle on the first day of Hanukkah and increase it each day until all eight are lit, or the other way around. The House of Shammai referred to the instructions about celebrating the Feast of Sukkot in Numbers 29 in which the number of bullocks sacrificed decreases each day, suggesting that we should do likewise with the candles, but the House of Hillel insisted that the number of candles should increase each day, since holy things should increase, not decrease. Today we go with Hillel’s idea, and light an additional candle each day, until all eight are burning on the last day. But we can see here that the Jewish Sages link the Hanukkah festival back to the eight days of Sukkot. And this is not by coincidence.

In Haggai 2, we see God emphasising a particular date, three times over – the 24th of the 9th month – in verses 10, 18 and 20. Hanukkah is the 25th of Kislev (the 9th month – Kislev is a Babylonian name) but Jewish feasts always start the evening beforehand. The chapter is about consecrating the temple, and what makes things “holy” and “defiled”. The people of Israel had been sinning so badly that God removed them from Israel and sent them to Babylon, but now they had come back, eager to follow God’s ways and restore his temple. Beforehand, there was a time of curse and want, but now God promises blessing. It was, in essence, a national rededication.

And did you know what they did to celebrate the rededication of the second temple? They had a Sukkot Festival – the Feast of Booths. You can read all about it in Nehemiah 8. Sukkot is a really big feast in the Bible, and often just called “THE feast”. This could well explain why Hanukkah is eight days long. The Jewish feast of rededication goes all the way back to this particular celebration of Sukkot in Nehemiah’s day, held at an unusual time of year, in order to consecrate and dedicate the second temple – and the people themselves. 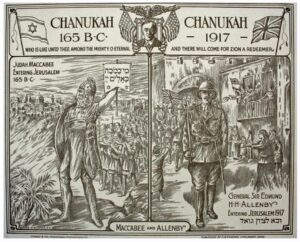 But even more than that! We find that not only can we trace this feast of dedication back to the Sukkot celebrations of Ezra and Nehemiah’s time as they began their fresh start after the exile in Babylon, but you’ll never guess what date it was when Ottoman Empire’s hold on the Holy Land finally came to an end…

General Allenby made his famous entrance into Jerusalem, dismounting from his horse and taking off his hat in respect for the magnitude of the moment, on Hanukkah, 24th Kislev, 1917. The Holy Land was no longer under Islamic rule, and though neither the British nor Israeli governments can be considered above reproach in all that has happened since then, it was was a watershed moment for God’s own land as the Jewish people would come back from their extremely long exile in the nations, and be planted back afresh in Israel once again. That certainly deserves a big housewarming party!

“For on my holy mountain, the mountain height of Israel, declares the Lord God, there all the house of Israel, all of them, shall serve me in the land. There I will accept them, and there I will require your contributions and the choicest of your gifts, with all your sacred offerings. As a pleasing aroma I will accept you, when I bring you out from the peoples and gather you out of the countries where you have been scattered. And I will manifest my holiness among you in the sight of the nations.” (Ez 20:41-42)

What a massive Feast of Dedication THAT will be.