Israel is a Powerful Reminder of God and the Bible

You may not need a reminder, but there is an alarming surge of antisemitism all over the world today. It’s coming from all over the political, ideological, social, cultural and economic map. It is accompanied by a rise in the level of opposition to the State of Israel. Although most of it has its origins in “the usual suspects” among the fringes of the political Left and Right, and religious communities with a legacy of antisemitic tropes and fairy tales, a growing amount of this opposition to Israel is even coming from secular Jews in Western countries.

Why do the nations rage?

Some of my liberal Israeli Jewish acquaintances are baffled by this. They point out (correctly) that Israel is one of the most LGBTQ friendly countries in the world and they wonder why this doesn’t motivate LGBTQ groups in Western countries to desist from their opposition to Israel, if not become supporters of this country. They also point out (once again, they are correct) to the large number of Arab citizens of Israel, both Christians and Muslims, who are in senior positions in society, including Supreme Court justices, university professors, CEOs of large corporations and the like, and they wonder why Israel still gets labeled as an “apartheid regime” by so many liberals all over the world. They wonder why Israel gets hit with this label by influencers and NGOs when there are so many other countries, including most of Israel’s Arab neighbors, who actually meet the criteria for being an “apartheid” state, yet the voices screaming about Israel’s imperfections completely ignore these other countries. What can explain all this? The answer escapes most Jewish people both in Israel and the Diaspora and it is a mystery to many Christians as well, including many who support Israel. Here’s what I think.

One of the things you always hear from Bible-believing Christians who support Israel is that the existence of Israel reminds them that the Bible can be trusted and that the God the Bible describes keeps His promises.

What few of these Bible-believing Christians ever consider is that there are many people living in this world (actually, it’s the large majority of people in this world) who don’t want to be reminded of these things.

But the mere existence of a country with the name “Israel” that has its capital in a city called “Jerusalem” and other large cities with their original biblical names like “Ashkelon”, “Ashdod” and “Beersheva”, not to mention the famous “Sea of Galilee”, “Jordan River”, and the “Judean Desert” inevitably bring to mind a book called “The Bible”. And along with it, the God which that book describes. It’s a reminder of God’s established rules and boundaries which He expects His creation to live by and within. He has also warned His creation in His Word that there will be these things called “consequences” for willfully disobeying Him.

For the majority of people in this world, including many secular Jews and liberal Christians, being reminded of the Bible and the God it describes is very disconcerting and uncomfortable. The rage this prompts is visceral, not logical.

You can’t argue against it using logic or truth, because those who have these feelings are impervious to these things. Many would like to live their lives as if this book called “the Bible” and the God it describes (with all His rules, boundaries, along with His authority and power to impose these “consequences” for disobedience and rebellion) didn’t exist. Such people will never be comfortable in a world with a country named “Israel” on the map, providing a tangible, visible, impossible-to-ignore reminder of all these things they’re studiously avoiding.

As we approach the end of this age, and the day when every single human being who ever lived will stand before the Throne of Christ and give an account for their lives, the “consequences” for sin and rebellion will become impossible to avoid or ignore. We can expect the rage felt by those who so desperately want to avoid and ignore those things which remind them of God and the Bible to increase. Even those who do believe the Bible can struggle with Israel as a constant reminder of God’s sovereign right to run things as He sees fit. The choice of Israel for His purposes in the world irks many to their core, and requires faith in God’s goodness, justice, and love in order to trust His decision—and His sovereign right to make decisions without consultation or approval from us.

The question, as always, is ‘what is to be done about this’? In my humble opinion, this is one area of spiritual warfare the Body of Messiah worldwide, including here in Israel, needs to be devoting a lot more prayer to. This should be a point that every single believer who supports Israel should be including in their weekly prayer meetings and personal devotion time. This is not an argument that can be won in the flesh, it is a battle which can only be won in prayer.

If you would like to start praying about this but aren’t sure where to begin, visit our PRAYER PAGE for a downloadable guide, along with other helpful resources to help you get started >> 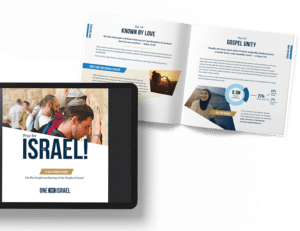 Why do the nations rage
and the peoples plot in vain?
The kings of the earth set themselves,
and the rulers take counsel together,
against the Lord and against his Anointed, saying,
“Let us burst their bonds apart
and cast away their cords from us.”

He who sits in the heavens laughs;
the Lord holds them in derision.
Then he will speak to them in his wrath,
and terrify them in his fury, saying,
“As for me, I have set my King
on Zion, my holy hill.”

I will tell of the decree:
The Lord said to me, “You are my Son;
today I have begotten you.
Ask of me, and I will make the nations your heritage,
and the ends of the earth your possession.
You shall break them with a rod of iron
and dash them in pieces like a potter’s vessel.”

Now therefore, O kings, be wise;
be warned, O rulers of the earth.
Serve the Lord with fear,
and rejoice with trembling.
Kiss the Son,
lest he be angry, and you perish in the way,
for his wrath is quickly kindled.
Blessed are all who take refuge in him.