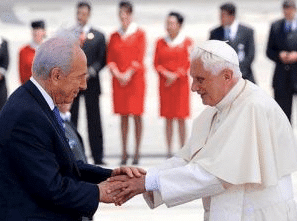 By ONE FOR ISRAEL (Messianic Jews in Israel)
4

Who Really Killed Jesus? Not the Jewish people as a nation, decreed Pope Benedict XVI, who resigned yesterday. Amid the surprise and kurfuffle of the reactions, the legacy he leaves in releasing Jews from the accusation that they are collectively and singularly responsible for “killing Jesus” has been noted in Jewish quarters. This damaging dogma has been passed down the generaions through the Catholic church, causing much anti-Semitism and excusing countless murders of Jews. Of course, there are a wide variety of views about the Pope and Catholicism in general, but whatever we may think about the Pope, it’s good news that this profoundly unhelpful theological line has come to an official end. So why did it begin and how did it end?

It was a shock for me when I came to Israel for the first time, and got chatting to a young woman, to see her reaction to my faith. I had shared that I believed in Jesus, and that I had come to Israel because of the special place Israel has in God’s heart. “But I thought Christians HATED Jews?!” She exclaimed in surprise, her eyes wide open in shock. I was then surprised by her surprise – “Why in the world would Christians hate Jews?” I asked, bewildered, thinking about how much Christians have receieved from the people of Israel. “Because the Jews killed Jesus,” she replied, matter-of-factly, as if I was slightly daft. This was new and strange to me. I was not aware of the hatred and persecution that had resulted from this falsehood. I knew perfectly well that my sin alone was quite sufficient to lead to the death of my saviour, and that he had chosen the cross for me. I did not understand this long-established, anti-Semitic blame of Jews in particular at all. So where did it come from?

The Gospel of John talks a lot about “The Jews”, and it is easy to assume that this term “The Jews” means all of them. Every last member of the house of Israel. In John’s account of the life of Jesus, “The Jews” are the ones who accuse him and eventually have him killed. But the Pope’s book on the life of Jesus points out that both John, the writer of the book, and Jesus were also Jews. So when John writes “The Jews” he can’t possibly mean every single Jew. “This expression has a precise and rigorously limited meaning…‘the temple aristocracy,’” he concludes.[1]

The other main point of contention is Matthew’s account of Pilate asking the (largely Jewish) crowd what they want, and their response being, “His blood be on us and on our children!” (Matthew 27:25). Whilst it seems that the crowd were accepting the responsibility for the decision on themselves and their descendents, the Pope pointed out, “How would it have been possible for the entire population to have been present at that moment to ask for the death of Jesus?” Not every Jew can possibly be included in this call. And indeed many of them were already devoted followers of Jesus, as Jews. Additionally the Pope suggested that this call for the blood of Jesus to be upon them should not be seen, “Not a curse, but redemption, salvation.”

Shimon Peres responded to the news of the pope’s resignation with appreciation of these steps that have been taken to distance the Catholic church from their traditional line, saying; “Under his leadership the Vatican has been a clear voice against racism and anti-Semitism and a clear voice for peace. Relations between Israel and the Vatican are the best they have ever been and the positive dialogue between the Catholic Church and the Jewish people is a testament to his belief in dialogue and cooperation”.[2]

If we want to get technical, the people nailing Yeshua to the cross were Italian soldiers, but the real truth of the matter is that it was the sin of you and I that was responsible. And ultimately, it was not those nails that kept him on the cross, but it was his love for you and I that held him there, and his determination to pay for our sin in full. The blame must fall on each one of us – without exception, we have all committed sins which took him to the cross, but he was the one who freely made the decision to be our sacrifice. If we had not sinned, there would have been no crucifixion, but without his agreement he would never have been killed.

When we realise our guilt and then this astonishing choice of love on our behalf, it cuts us to the core. Soon he will reveal this wonder to the Jewish people en masse:“And I will pour on the house of David and on the inhabitants of Jerusalem the Spirit of grace and supplication; then they will look on Me whom they pierced. Yes, they will mourn for Him as one mourns for his only son, and grieve for Him as one grieves for a firstborn” (Zechariah 12:10).

The Jews have been exonerated by the Catholic church for the sole responsibility of “killing Jesus”, but pray with us for them to embrace the precious and deeper truth that his death was not just for Christians; This Jewish saviour has bought life for them too!
[1] Time Magazine, Mar. 03, 2011
[2] Statement on Shimon Peres’ official Facebook page 12/2/2013

ONE FOR ISRAEL (Messianic Jews in Israel) 427 posts 0 comments

The Turning Of The Seasons

What Is Blessing, Exactly?

The Interesting Connection Between Passover and the Coronavirus Plague

The Spiritual Workout of Coronavirus

Forgiveness – from a Messianic Jewish Perspective