Please don’t love us (Jewish people) more than you love your Jewish Messiah!

What do I mean?

Being part of “the remnant” (Romans 11:1-6) is no easy task. On the one hand, many of my fellow Jews (who only know what the rabbis have told them about Yeshua) tend to look at me as if I have betrayed my heritage and chosen to follow some kind of pagan god. We Messianic Jewish believers are not very popular among the majority of Jewish people here in Israel.

But on the other hand, more and more Christians now base their understanding of God’s plan for Israel on what they see on CNN and BBC – that is to say, not very favorably. We, Israel, are getting less and less popular among the church in the nations too. So I guess it’s safe to say, as the English saying goes, that I am caught between the devil and the deep blue sea.

While I am very encouraged by the support and love for my nation of Israel coming from many of my Christian brothers and sisters around the world, I am also very saddened when I hear/read things from these very people who love my country so much that they don’t seem to think Jewish people even need salvation through Yeshua (Jesus)! Israel may be great, but it’s not perfect – we also need to have our sins paid for, just the same as everybody else. To suggest otherwise is condemning us to an eternity separated from God.

People Who Love Israel to Death 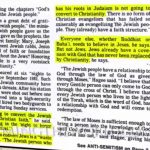 Some good examples can be found in the teachings of the well known ‘Christians United for Israel’ chairman, Pastor John Hagee. In his teachings, Hagee promotes the false idea that Jews do not need a personal relationship with Jesus, but can be saved just by keeping the Old Covenant. Tragically, he said;

“The law of Moses is sufficient enough to bring a person into the knowledge of God until God gives him a greater revelation…Everyone else, whether Buddhist or Baha’i, needs to believe in Jesus, but not Jews”. (John Hagee) 1

Shocked? I certainly was.

It seems that Hagee fails to understand the purpose of the Abrahamic covenant (nationalistic covenant having nothing to do with personal salvation) that God made with our nation. Nor does Hagee understand the purpose of the Law of Moses; How does Hagee expect Israel to keep the Law of Moses now that we have no priesthood, no temple, and no sacrificial system – all of which comprise the heart and essence of the Law? (and was only meant to lead us to Christ). You see, we cannot separate Moses’ Covenant from Moses’ laws. The laws are merely an outgrowth of the covenant; they cannot stand on their own – just as eating mayonnaise and mustard is pointless without the sandwich itself. (Our new book on the Torah explains that farther). The covenant was ratified by the shedding of blood (Exod 24:8) and was maintained by the blood of the sacrifices upon the altar (Exod 30:10). Without the sacrificial system we are unable to keep Moses’ covenant. Besides, the Bible says that no one is able to keep the Law, nor be justified by the works of the law (Galatians 2:16), therefore no one was ever able to receive salvation through it. It is ONLY the blood of Yeshua the Messiah (Jesus) that can save us and wash away our sin.

Hagee goes further in his book, “In Defense of Israel”, (which, ironically, ends up being far more of a danger to Israel than a defense):

Hagee says, “there is not one verse of Scripture in the New Testament that says Jesus came to be the Messiah…” (p. 136)
But Jesus said he was the Messiah: “The woman said, “I know that Messiah is coming… Then Jesus declared, “I, the one speaking to you—I am he.” (John 4:25-26)

Hagee says, “The Jews were not rejecting Jesus as Messiah; it was Jesus who was refusing to be the Messiah to the Jews.” (p. 140)
But Jesus said, “For I tell you, you will not see me again until you say, ‘Blessed is he who comes in the name of the Lord” (Matt 22:39)

Hagee says: “He refused to be their Messiah, choosing instead to be the Savior of the world.” (p 143)
But Scripture says, “let all Israel be assured of this: God has made this Jesus, whom you crucified, both Lord and Messiah.”

See the problem? Hagee holds to a false teaching called “Wider Hope” (which is a branch of “Dual Covenant Theology”)

The idea promoted by some Christians that it’s fine for Jewish people to continue to reject Yeshua as Messiah grieves me as an Israeli Jew not only because it is heresy, but also because I know a side of Israel that people like Pastor John Hagee doesn’t.
Yeshua, who obviously strongly believed in the Bible, made less of a big deal out of territory and land than he did about taking care of people – especially the poor, the needy, the elderly, widows, orphans, and so on. Yeshua’s message wasn’t at any point a geopolitical one, but a spiritual one (peace in the middle east will not come from Benjamin Netanyahu, nor from Hagee’s CUFI, but can only take place at the foot of the cross, when Jews and Arabs will recognize and put thier trust in the prince of peace).
Again and again, the Hebrew Scriptures emphasize and teach that the nation of Israel must take care of its people, especially the weak, poor and needy.

Yet today, 1 out of every 3 Israeli children suffer from poverty (Israel ranks 4th in child poverty in the developed world). The medical system is collapsing for lack of funds and medical staff (Israel has OECD’s most crowded hospitals). According to Transparency International, corruption in Israel is embarrassingly ranked 60 out of 100. One in four Holocaust survivors suffer from poverty. On multiple occasions this past year, I myself have brought food to Holocaust survivors who face the weekly decision of whether to buy food or to buy necessary medicine. Human trafficking reports rank Israel with 3rd world nations. The sex trade in Israel generates up to $500 million in revenue per year (that is over $60 a person!) while prostitution is legal and widely available in Israel. In its annual report for 2012, the International Narcotics Control Board lists Israel among the “countries that are major manufacturers, exporters, importers and users of narcotic drugs.” Israel is one of the world’s leaders when it comes to abortions, with 55 babies being killed every day – and our government is the one subsidizing it.

You see, just like anywhere else in the world, our country is comprised of sinful human beings who unfortunately are yet to recognize their need for the Savior. As a result, our country’s immoral decisions are evident. (Just to be clear: I love Israel, and the fact that I am able to criticize my own government proves that Israel is the only true democracy in the Middle East. Anywhere else and I would most likely be face to face with Jesus by now. ☺)

As the people of Israel, our hope should not be in our government, nor in the IDF – but in our Savior alone. What God’s heart really delights in is not waving the flag of Israel, or shiny new IDF tanks, or even olive oil purchased from the Promised Land – it is when a human being makes a decision to follow the Messiah. What our people really need is…Yeshua!

So, dear Christians, as an Israeli Jewish follower of Jesus, my challenge for you today is not to love us Jews into hell, but to live up to the biblical mandate of provoking us to jealousy in Yeshua (Romans 11:11). Trust me, I myself am living evidence that it worked 16 years ago, and it’s still working with many other Jews.

Dear Pastor Hagee, I love you as a brother in Christ, yet let me challenge you that my nation Israel doesn’t need your millions of dollars supporting secular causes, (a lot of which ends up with the anti-missionaries who fight us sharing the gospel), nor do we need your political support. What Israel needs is the message of the gospel! What my people need is to hear about Yeshua, our Jewish Savior who gave His life for us so we can find eternal life!

If you agree that the best way to bless Israel, is with Yeshua the Messiah – please SHARE my post!

ONE FOR ISRAEL is an initiative of native-born Israelis on the forefront of high-tech media evangelism, proclaiming salvation to Israel, raising up spiritual leaders through ONE FOR ISRAEL’s Bible College and equipping them with the tools they need to transform our communities.
All Posts
PrevPrevious ArticleIs the Old Testament Still Relevant to us Today?
Next ArticleThe Walls Of JerusalemNext

PrevPrevious ArticleIs the Old Testament Still Relevant to us Today?
Next ArticleThe Walls Of JerusalemNext