The Revolution of Pentecost

Pentecost (the word “pente” relates to the 50 days counted since Passover) is also known in Israel as Shavuot, the Feast of Weeks. Pentecost was the event when the Holy Spirit was poured out and made available to all flesh, as God promised through the prophet Joel. It’s easy to forget that before Yeshua came and opened up the new and living way, Gentiles were banned from the Temple courts.

But then, on the morning of Shavuot, a revolution began:

“How is it that we hear, each of us in his own native language? Parthians and Medes and  Elamites and residents of Mesopotamia, Judea and Cappadocia, Pontus and Asia, Phrygia and Pamphylia, Egypt and the parts of Libya belonging to Cyrene, and visitors from Rome, both Jews and proselytes, Cretans and Arabians – we hear them telling in our own tongues the mighty works of God!” (Acts 2:8-11)

Even though Peter spoke to the crowd in one language1 (Greek was the lingua-franca of the time), God chose to speak to the assembled nations in their own tongues, supernaturally! It was a sign of the enormous shift that was taking place. It’s true that most of the crowds there were Jewish, but it was a sign that the time for the nations had come. The veil had torn in two from top to bottom, and the way to the Father had been opened to all.

The Gospel goes out to the ends of the earth

“You will receive power when the Holy Spirit has come upon you, and you will be my witnesses in Jerusalem and in all Judea and Samaria, and to the end of the earth” (Acts 1:8).

And ten days later that’s exactly what happened. After 40 days on earth in his resurrected body, Yeshua ascended to the Father, and the disciples waited, nervously, huddled together, for the promised Holy Spirit. The day of Pentecost came, and they didn’t know what had hit them! They transformed from terrified and persecuted undesirables into a handful of men who “turned the world upside down” (Acts 17:6). Haltingly at first, with more than a few reservations, the Jewish disciples began to include Gentiles into the body of believers. Could these Gentiles worship our Jewish Messiah? Should they be circumcised now? These were the questions that the early church had to settle before the message and life in Yeshua could go forth freely. A few visions and conferences later, the matters were dealt with and the word spread like wildfire.

Almost as if someone had planned it, the infrastructure of the whole of the Middle East and Europe was ready – straight, easy roads, one common language, and with the encouragement of persecution in Jerusalem, the disciples dispersed rapidly and so did the Gospel along with them.

The Spirit of God prevented Paul from going East,2 and beckoned the evangelists Westward, through Asia Minor, Greece, Italy and beyond. And the Gospel has largely traveled in that direction throughout history, now coming all the way back towards Jerusalem again. God grants nations the grace to receive the Good News as we have latterly seen poured out in China and Iran where numbers that defy logic have turned to Yeshua under the most hostile of circumstances. And many of the tens of millions of Chinese believers who do not fear man or persecution are determined to carry the message back through the 10-40 window of the hardest to reach countries that lie between them and Jerusalem. Every nation must hear before Yeshua will return to Jerusalem again.

Every nation, tribe and tongue 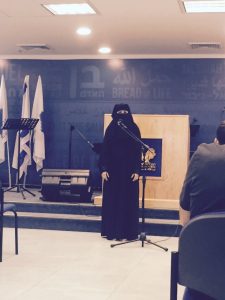 She stood before us, dressed head to toe in black, as she used to as a Muslim, and shared her amazing journey to faith in Yeshua (watch it here). From a family of Islamic leaders in a country that was 98% Muslim, Rabab* started wearing a hijab at the age of six. At the age of eight she saw a woman executed in Saudi Arabia when they had gone on pilgrimage to Mecca, and her father told her that this is the fate of those who are not good Muslims. She was desperate to please God and to know him, but got no answers to her questions. When her family went to the US, she heard the Gospel for the first time. Someone invited her to come to church. “One word I experienced from these people was LOVE”, Rabab explained, sharing how people had taken such an interest in her as a person, and given her such a welcome. The sermon was on Isaiah 61, and it affected Rabab in a very powerful way – it was the first time in her life that she had heard that Jesus came into this world to heal the broken-hearted. She was hungry to hear more, and her friend gave her a Bible, which she hid under her mattress.

“Who is this God who helps people?” She wondered, as she read the stories. “Allah never helped me!” It suddenly started to make sense to her, and the veil came off her eyes.

She understood that Yeshua came from the Spirit of God, and that is why he did miracles, why he rose from the dead, why he had mercy and compassion, and why he reached out to women. She told us that the Bible filled her up with love, and the walls inside her were coming down. Instead of hating the Jewish people as she had been trained to do, her heart was filled with love for them. God had been distant to her all her life, unattainable, but now she had found that God loves her, and had chosen her.

“It’s a privilege to stand here, in the Holy Land, where the Lord walked, and see that it’s real. It’s not a story book, it’s real! When I would hear the word “Jew”, hatred would rise up in my heart even though I never met one. But when I read the Bible, God showed me that the nation of Israel are his heartbeat – he protects them every day… but our Lord loves you so much, I see you as diamonds!”

She is not the only unlikely person to come to our Bible college – we have had guests from Egypt, Iran, and all over the world, coming to see the land of the Bible and meet the Jewish and Arab believers here. The Gospel has gone far and wide, and the blessing and testimonies are reaching us in Israel – the place where it all began.

We do not take Rabab’s heart for Israel for granted – many Arab believers identify strongly with the Palestinians and object to the Jewish state of Israel. In a recent trip to share with some Egyptian Coptic Christians, one of our Arab students was welcomed among them with open arms… until it came to light that he was from Israel. But he challenged his new friends with this passage from Ephesians:

“Remember that you were at that time separated from Messiah, alienated from the commonwealth of Israel and strangers to the covenants of promise, having no hope and without God in the world. But now, in Yeshua the Messiah, you who once were far off have been brought near by the blood of Messiah. For he himself is our peace, who has made us both one and has broken down in his flesh the dividing wall of hostility.” (Ephesians 2:12-14)

There was a time when Gentiles were prevented from worshiping the God of Israel, and had to stay outside the Temple courts. Instead of telling us to “forget about what was behind”, Paul encourages the Gentile believers to “remember” how things used to be. The wall has gone, and we are one in Messiah. The Egyptian believer ended up praying with love for the Jewish people, declaring that “All Israel will be saved!” Amen! Equally, it is important for us to stand in solidarity with our Coptic brothers and sisters as they are being so fiercely persecuted at this time. God has made great promises to Egypt too, in Isaiah 19, and calls them “My people”.

But even those persecuting the Egyptian Christians are not too far off for God to reach. I heard of someone who had personally met three former ISIS members who had come to faith in Yeshua! God’s powerful message of freedom and forgiveness is truly for all flesh.

*Rabab is not her real name

ONE FOR ISRAELhttp://www.oneforisrael.org
ONE FOR ISRAEL is an initiative of native-born Israelis on the forefront of high-tech media evangelism, proclaiming salvation to Israel, raising up spiritual leaders through ONE FOR ISRAEL’s Bible College and equipping them with the tools they need to transform our communities.
296,991FansLike
21,504FollowersFollow
5,762FollowersFollow
281,283SubscribersSubscribe

What's in a Mezuzah?

A Biblical Method to Overcome Evil